You never know what you will find once you start to pull a room apart.

Well, tonight's blog post is a bit of a spur of the moment write up, written with excitement to share our recent find. We have been very busy with the garden, trees, tractor, and general house upkeep. Today it was raining for most of the evening so we decided to head upstairs to the bedroom we have been remodeling.

We haven't had a chance to really write a post about the room remodel, so I will give it a quick explanation and if you stick with me you'll get to see the really cool things we found in the room.

To start this off: the room started off as "we are just going to paint it before we move our bedroom up there." Famous last words.


Then it turned into... the carpet is older so maybe we will just replace that...  So we removed it and found the original wood flooring with the original paint (plus some extra since the previous owner painted his trim right on the ORIGINAL FLOOR.)


Well, then we got poking around in another room and realized that the previous owners had drywalled over the plaster so we decided to poke around up in what will be our bedroom and we struck gold! We not only found the original plaster... but the original baseboards too. He just drywalled right over them. Thank goodness he didn't just get rid of them.


So, as you may guess by this point in time, we are now removing the baseboards and restoring them, removing all drywall (including the closets), and restoring the floor back to it's original 19th century color. Wow, did that escalate.

We started the process by removing the drywall. What a mess, but we found the plaster walls to be fairly stable under their wallpaper.

Funny thing you don't realize until you remove the drywall... now all the window frames and door frame pieces don't fit anymore, so we will need to redo those. But not to worry, because we have the original door, so we shall be putting that back and reframing the door anyways. Some of the old doors were found in one of the barns.

Well now that the drywall is removed and hauled off, we paused for a long time to try to get all of the outside tasks accomplished. But in the mean time, we hired an electrician to pull out half of the 10 outlets that were in the tiny room and remove all modern lights. Why no we aren't crazy, lamps are a great invention.

Today, we did a quick step to try to move the room forward since it was raining. We removed the wallpaper. There were two layers of wallpaper on the plaster. Really, we did this to try to ascertain the extent of the damage to the plaster from the previous owner putting a thousand screws into it to hang the furring strips that the drywall was hung on. We certainly did not expect to find what we found.

First, off came the pink wallpaper put on by the owners we purchased the home from. 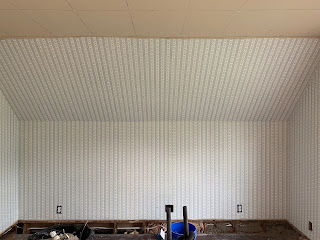 Then we had to take down the blue wallpaper, hung by 2 owners before us. I don't know what he used to hang that wallpaper, but I think it could have glued just about anything together, the wallpaper was still so well stuck to the wall. We worked carefully to try not to pull off as much plaster as possible, since it is far easier to stabilize than repair. As we went we made some pretty amazing discoveries... 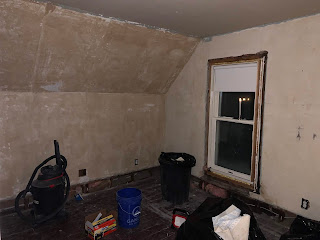 First, I found this guy and his friend: 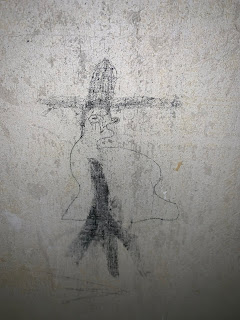 Someone wasn't convinced when I told him I thought it was a mid 19th century drawing.

Then we found this guy:


and finally we found this guy and his pipe


So, after all of our discoveries, we both are fairly certain, based on other mid 19th century graffiti we have seen and drawings on other paper goods, including ones we own, that these drawing date to when the first owner built the house. 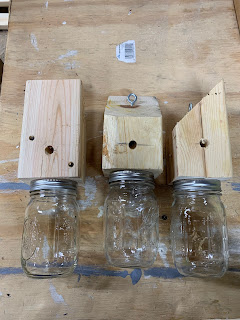